When North Carolina Governor Roy Cooper gave his State of the State speech to a joint session of the General Assembly on Monday, April 26, it was a historic evening. But what was historical about it was never highlighted by Cooper – not a word in his speech.

“Gov. Cooper delivered his State of the State speech tonight.

“An indication of how far North Carolina has come is Mark Robinson, our State’s first black Lt. Governor, presiding over tonight’s event.

“And an indication of how far the North Carolina Democratic Party has to go is the Democratic Governor’s failure to recognize Lt. Gov. Robinson during his speech.” 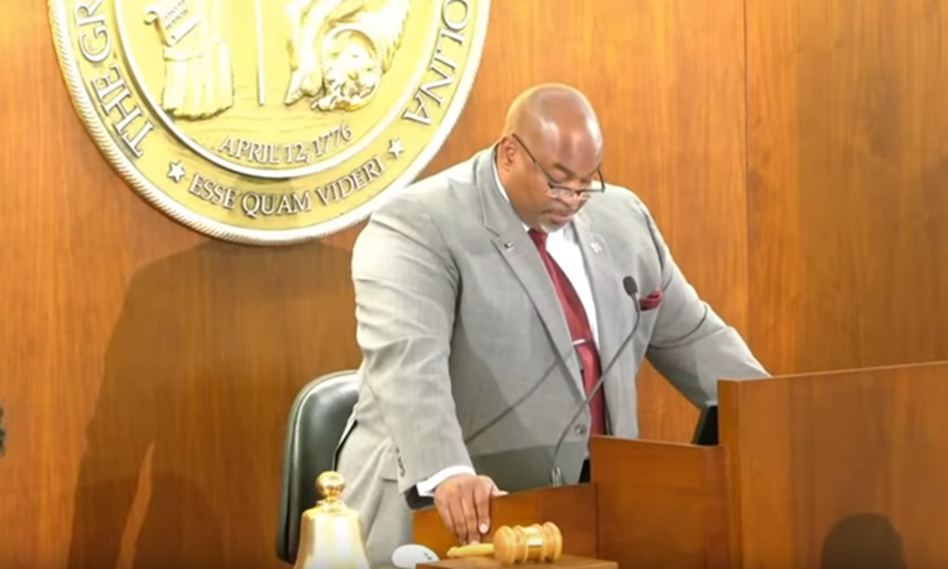 The omission was egregious when you think about it, especially since Cooper removed Confederate monuments on the Capitol lawn, marched alongside protestors after the death of George Floyd, made statements in support of Black Lives Matter, and even brought up the issue of racism in his State of the State speech. Moreover, Cooper is a Democrat, supposedly the Party that genuinely cares about the black race. Yet, nothing in North Carolina history has ever occurred like what happened on that Monday evening – a duly elected black man presided over an entire branch of our State’s government – to hear the Governor’s State of the State speech – and there was not the first acknowledgment of Robinson’s achievement for himself or the race he honorably represents.

Did the media point out the exclusion? As expected, not a word.

One can only surmise as to why. But it seems apparent it’s because Robinson doesn’t fit the liberal narrative. He’s not the kind of minority that helps their cause. Robinson is a black political and social conservative who is a Republican and forthright about his Christian faith. Perish the thought – a person with those colors is perceived as both a rebuke and a threat to the liberal’s worldview. That status won’t even get you honorable mention in the halls of power with Leftists like Gov. Cooper, even if you are the first black Lt. Governor in the State’s history.

Race, race, race. It’s seemingly almost all we hear about from the Left these days. But when Democratic politicians, like Cooper, overlook, ignore, and diminish great men such as Mark Robinson, it seems to confirm the suspicion that race is being wielded as a political weapon.

Robinson knows it. He recently said, “Far too long liberals and the media have lied to the black community and used them as political pawns.”

In testimony before a House subcommittee hearing on the Voting Rights Act and supposed voter discrimination, Robinson referenced one of the most iconic moments in civil rights history – that moment when four American black college students sat at a whites-only lunch counter at Woolworth’s in Greensboro, North Carolina. Robinson said:

“Just a few days ago, the vice president [Kamala Harris] went and visited…the lunch counter in Woolworth’s to see the place where history was changed. You know who wasn’t invited to be with her? My good friend and civil rights icon Clarence Henderson. The person whose picture is in the history books, the person who actually sat in the chair and endured to make sure that black voices were heard.”

Why wasn’t Henderson invited to stand with the vice president? Henderson is a native North Carolinian. The answer is simple, like Robinson, he too is a black political and social conservative who is a Republican and forthright about his Christian faith. Perish the thought. No invitation for Henderson!

Understand me; I believe racism still raises its ugly, demonic head. Anytime it does is too often. Nevertheless, I agree with Tim Scott, the black Congressman from South Carolina, who recently said in his rebuttal to President Biden’s nationally televised speech: “America is not a racist country.” In other words, racism doesn’t define us, despite the claims of those who say it does.

As James Daane has eloquently written in Baker’s Dictionary of Christian Ethics:

Racial “differentia are incidental and relative to what constitutes authentic humanity. When these relative differences are turned into absolutes, race turns into racism…When a feature of race incidental to our humanity is absolutized, the race processing this feature exalts itself as a superior race, develops the consciousness that it is the historic bearer of a transcendent destiny to lead the world, by whatever required means, into its future.”

Of course, this Christian understanding of racism would also be an admonishment against something like Critical Race Theory, which asserts those who condemn racism are defined as oppressors when they belong to the wrong (white) group.

White, black, and all minorities need to get wise to the Left’s hypocrisy on race. Racism is real, but nefarious forces are manipulating many, turning us into useful idiots, and in doing so, they’re jeopardizing the advances already made on race. They would ignore the Mark Robinsons, the Tim Scotts, and the Clarence Hendersons of our nation. In fact, they really don’t care who is marginalized, black, white, Asian, or Hispanic, as long as their agenda to redefine Western Civilization is ultimately achieved.